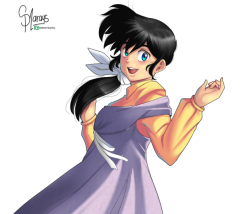 There are beautiful days when drawing can be enjoyable, ideas flow easily and we feel overwhelmed with inspiration turning a blank sheet into the home of the imagination.

But ... what happens when those days come when not even a simple two-line doodle can you do? Well friend, that is what we call the artistic block.

Before talking to you about my story, I want to explain quickly what artistic block is about and it is nothing more or nothing less than the temporary inability to capture ideas, whether drawn or written, coming to feel moments of frustration and anxiety. This can appear for three reasons: Being going through periods of work, family, health, ect, Falling into monotony in our designs, finally feeling that what we do is not going to take us anywhere.

About that last one I want to talk to you.

There was a time in my adolescence when for the first time I took a manga in my hands (I did not know they were called that until my brother told me). When I saw this, I remembered that I was already making small stories in badly drawn vignettes, but even so I wanted to someday be able to get to draw that beautiful and that's when my desire to draw began.

Little by little I was improving in drawing but something happened that completely discouraged me, the death of my father and some problems that remained after his death, both in family and financial relationships. That completely filled me with discouragement, so much so that it was difficult for me to keep ideas.

And so I spent several years mulling over my discouragement, until a moment came when I asked myself the question:

Are you going to let discouragement drag you around doing nothing?

That question came to me after a few things like seeing projects by some cartoonist colleagues on Facebook who, despite having their own difficulties, have been able to publicize their webcomics regardless of whether they are still polishing their lines, that does not stop them. That echoed in me, managing to slap me and wake me up from my lament area.

Today, I am excited and again I return to some old projects and now much more, I have started to make commissions online. I have opened my space here in artists & clients and I am very excited to start.

Something I learned is that it is good to take a break, without personal pressure, to meet and be inspired by other artists and little by little to pick up on what we like.

Way to go! Once you hit 'continue', you will be taken to our private messaging page. Send us a message that you want to submit your story and we will send to you the guidelines for submitting your own story!

We currently has fixed a minor bug, please re-upload your sample images, to make sure your slot is available.